Hey, this photo is under © copyright

Born and raised in the historic fishing community of Grand Bank, Newfoundland, Travis Parsons has his hometown to thank for the majority of his artistic inspiration.

His childhood was spent exploring the rocky cliffs above the North Atlantic, shopping in old merchant stores near the waterfront, and hearing the stories of the struggles and perseverance of the people that celebrated, and cursed on, the sea around them. 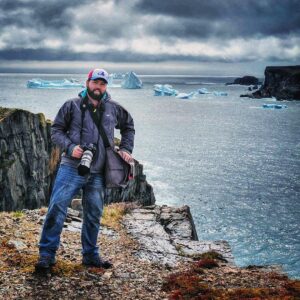 The vibrant colours, rough textures, and the many stories revolving around these spaces, can be seen today as the backbone of expression in much of Travis’ work.

Coming of age during a period when the community was in the midst of a downtown re-development project, Travis developed an even deeper love for the heritage of his hometown.  The vibrant colours, rough textures, and the many stories revolving around these spaces, can be seen today as the backbone of expression in much of Travis’ work.  Photographs that highlight the beauty of Newfoundland, while also often having a sense of melancholy to them.  A balance of beauty and strength, with a sense of loss and hardship.  This contrast is prominent in wedding photographs where Travis uses abandoned rural scenes as a backdrop to the beauty of a newlywed couple, as well as in his landscape photographs which feel like love letters to a place that has become a part of his DNA.

Upon leaving Grand Bank, Travis attended Memorial University where he focused his studies on cultural geography, history, and sociology.  It was in St. John’s that Travis took an interest in photography.  His earliest subjects being the beautiful scenes in Bowring Park, and the historic character of downtown St. John’s.  However, it was when he moved back to Grand Bank following graduation, that his photography really took off and his business became established.

During the years that followed his move home to Grand Bank, Travis developed into one of Newfoundland’s best wedding and portrait photographers, while also shooting landscape, commercial, and narrative photographs in between photo sessions.  A short stint as a journalist with the Southern Gazette helped push him to add more of an editorial touch to his work, and this evolution helped Travis to take his visual art to the next level.

Travis has had work published in Popular Photography, the Ontario Science Centre, Downhome Magazine, The Independent, and The Telegram.  In addition to published works, his photography has been used in short film development, and he has been a guest on a top ranked photography podcast.

In 2013 Travis won the provincial ‘Mentor of the Year’ award from Youth Ventures for his work in mentoring young photographers, and in 2014 he was named ‘Young Entrepreneur of the Year’ by the Burin Peninsula Chamber of Commerce.

While weddings and portraits have been Travis’ main line of work for over a decade, he has recently shifted focus.  He has stopped doing wedding photography, and has kept his portrait bookings to a minimum.  He now focuses on commercial photography, aerial photography, and producing artwork through landscape, composite, and narrative photography.  Commercially, Travis has worked with Atlantic Towing, Staples Canada, Canadian Tire, Sobeys, Government of Canada, Legendary Coasts, CBDC, NOIA, Clearwater, Ocean Choice International, and many more businesses throughout the Burin Peninsula, and the rest of Newfoundland.

If you would like to work with Travis, please send him an email at travis@travisparsons.com